You are here: Home1 / client 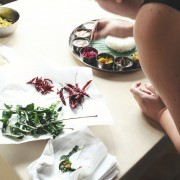 The photo shoot is tomorrow. And, a creative team awaits you in the studio. But, does the level of photography only depends on the skills of the photographers? If you are one such believer, then what about the client’s role?

Because good looking food and the best-cooked food is not always the same. Let’s say cooked meat or vegetables are to be shot, then it is advised to not to cook them to the stage of tenderization. However, if the kitchen itself is in the studio or quite near to it, you may choose to cook the subject properly. In case, the food has been brought from far it may start looking dull. Rather than cooking it all over again, few minutes finishing and the final touches would do! Or else be prepared for ‘not so lively images’. While for many recipes fully cooked loses the desirable texture and color required in the pictures.

Note: Just like keeping the food less cooked for the favorable surface appearance and shades is crucial; that doesn’t imply you would keep it too raw. Because that would make the food, look unpalatable.

Because every ingredient has its own worth

Secondly, when the shoot is to capture the mixed food items; then do make it a point to bring all the components separately. To elaborate more, let’s assume that chicken biryani is the hero. Keep the biryani separate from the chicken piece. Otherwise, the rice would absorb its favored color and texture. That separate recognizable big piece of chicken placed over biryani would make the viewer enjoy its abundance and the dish would appear clean and clear.

Know what to add and when

When recipes with gravy have to be highlighted, we call it the ‘wisdom’ to keep the ingredients in a fresh state. The key contents through appropriate addition can get a brilliant visual presence. Also, it would make sense to add gravy during the styling procedure only. Because gravy tends to get dried and create an unpleasant crust. That’s often the reason why food is rarely shot in a hot stage! It will ensure the newness of these components. As a result, the viewer gets drawn towards such an esthetically appealing dish.